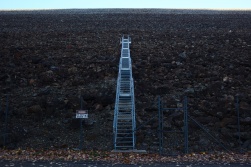 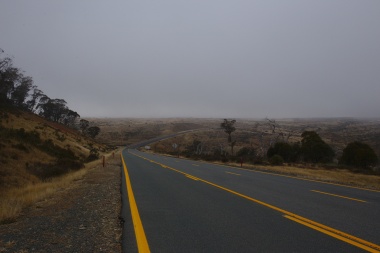 There are roads can get you from “A” to “B,” and then there are roads that lead you on the epic of journeys. The Snowy Mountains Highway is an example of the latter. This route links to the major sites of the Snowy Mountains Scheme, a post-war infrastructure blitz that ensured the supply of water and power for southeastern Australia. It cuts through the Australian Alps. One of the few locations on the continent where snowfall is guaranteed (in the winter). As a result the road is often closed in the middle of winter hence my timing to conduct this trip in the late autumn.

My goal for this trip was to simply make the run from Tumut to Cooma.  I woke up to a dense fog that made for some very moody black and white shots. The density varied on a street by street basis. Visibility on the highway itself was about 100 metres but from my accomodation I could barely make out what was in front of my car.

In my enthusiasm I went against common sense and decided to roll out. I was hoping that I would quickly get out of the fog as I made my ascent across the mountains. However as I left Tumut the prevailing fog was not improving. I then spotted a sign for the nearby Blowering Dam, one of the many products from the Snowy Mountains Scheme. I decided that wasn’t gaining anything from staying on the highway at the and so thought this detour was worth pursing. Much to my surprise access to wall and causeway were wide open to the public.

As I approached the dam wall the fog suddenly gave way to clear skies and the monolithic structure. Unlike other dams built Blowering was one of the few that had it’s wall comprised entirely of rockfill, which gave it this otherworldly look. I then moved to the causeway where I was greeted with a grand sight. I was able to look back on the valley I came through and see the fog simply sitting on the floor with the surrounding bushland peeking through. I couldn’t help feeling a sense of serenity as this view lay before me.

My deviation paid off as the fog had began to burn off as I returned to the highway. From here it was driving nirvana. Smooth, winding tarmac that led me across this fantastic alpine landscape. With no one else on the road to compete with I was alone with my music and thoughts.

If you want to see Australian landscape that isn’t red dust or claustrophobic cities, this is the drive to do. Even if you do this run only once you won’t be disappointed.